What to Expect When Facing Criminal Charges 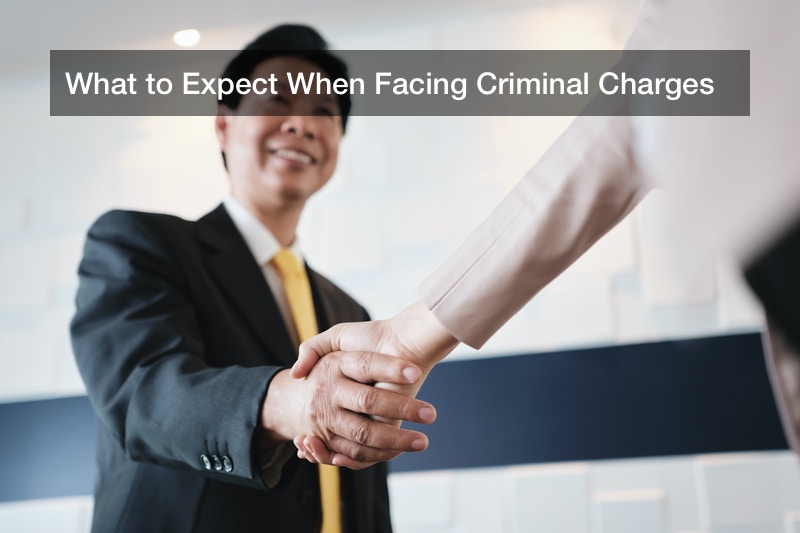 Facing criminal charges can be scary, particularly the first time you are arrested. For normally law-abiding citizens, a bad decision or moment of inattention can result in an arrest that can change their lives.

Here are seven things to expect when facing criminal charges:

For example, if a police officer sees you enter a smoke shop, buy cigarettes, and give those cigarettes to a minor, the police officer has observed a crime (depending on your state) and can arrest you. However, if a smoke shop owner calls the police and says that he saw you buying cigarettes for minors, the police must investigate and develop evidence whether it happened the way the shop owner reported it. The police might interview witnesses, review security tapes, and talk to you. If the police uncover evidence of a crime, you can be arrested. Without any evidence, an arrest would be improper and any charges could be thrown out.

Moreover, while law enforcement investigates crimes, it must abide by the U.S. Constitution’s protections for criminal targets. For example, law enforcement must also have probable cause to obtain a search warrant. As a result, searches conducted strictly as a fishing expedition without probable cause are improper and any evidence uncovered by them will be thrown out.

Similarly, law enforcement cannot question you without a lawyer present unless you are free to leave the interview or you waive your right to legal representation. If you are detained by police and you ask for a lawyer, the police must stop the interview and allow you to talk to your lawyer.

When you are facing criminal charges, the police may reach a decision to arrest you. An arrest occurs so the police can physically contain you while charges are filed against you. When you are arrested, you will be informed that you are under arrest and the police will inform you of your constitutional rights to remain silent and to have legal representation. The Miranda warning comes from a case in which the U.S. Supreme Court ruled that every person who is under arrest must be warned of their constitutional rights. If this warning is not given, any evidence collected by the police after your arrest can be thrown out of court.

After an arrest, the police can hold you in jail until you see a judge. In many jurisdictions, this means that you will spend at least one night in jail until a judge sets bail. However, in some situations, your lawyer might be able to negotiate a “book and release” in which you are allowed to leave the jail after booking without posting bail.

When you are booked into jail, the jail will collect information about you, like height, weight, and distinguishing features. The jail will also take your photograph, fingerprints, and, in some states, a DNA sample.

In some states, you will be subjected to drug testing to make sure that you are not intoxicated or high before you are placed into a holding cell. Depending on the charges and the wait to see a judge, the holding cell might be the end of your jail experience before bailing out.

However, if you are more than a few days from seeing a judge, you might be transferred into the general population of the jail until your court hearing.

While you could be provided with a public defender if you do not have the means to hire a private attorney, there are advantages to interviewing a few criminal defense lawyers to pick the best one to represent you. A few of the characteristics to look for in a lawyer include:

At this point in the process, the court will not determine whether you are, in fact, guilty or not guilty. Instead, the court only wants to know whether you plan to challenge the charges or plead guilty. Since this occurs relatively soon after the arrest, you will probably plead not guilty.

This will give you time to meet with your lawyer and plan your strategy. You will also have an opportunity to see the evidence against you, as discussed below. Moreover, your lawyer will have time to negotiate with the prosecution to see if a plea deal is possible or even get the prosecution to drop the charges.

The bail hearing is usually combined with the arraignment and consists of the judge determining whether bail will be granted and, if so, how much bail will be. Bail is intended to give you an incentive to appear at your trial. The theory is that if you have to surrender the property to the court, you will make all your court appearances to get your property back.

Some of the considerations in the bail hearing will be:

The judge might also impose restrictions on your bail and release. For example, the judge might order that your bail be paid in cash if the judge deems you a flight risk. This means that instead of posting a bail bond (explain in greater detail below) you will be required to post cash bail. Another restriction that a judge might impose on your release might be to surrender your passport so you do not leave the country.

The actual process of posting bail is not known by most criminal defendants, including those who have gone through the bail process while facing criminal charges. Most criminal defendants are not able to post cash bail. This means that they need help from a bail bond agent to secure their release from jail while awaiting trial.

Without this assistance, a criminal defendant could wait in jail for months, if not a year or more, for trial. However, with the assistance of a bail bond agent, criminal defendants can secure their release so they can work and take care of family while they are awaiting trial rather than sitting in a jail cell.

If bail cannot be posted as cash, a bail bond can be issued. Bonds are promises. In this case, bail bonds are promises to the court that you will make all your court appearances while you are facing criminal charges. The exchange that occurs is that you pay the bail bond agency’s fee and a bail bondsman promises the judge that you will appear in court. The court then authorizes the jail to release you into the bondsman’s custody so you can go home despite facing criminal charges.

However, if you make all your appearances and meet all your obligations under your bail agreement, your bail bond will be vacated and you the bail bond services will return your collateral to you. This will happen even if you are found guilty of the criminal charges you are facing.

Most criminal cases never reach trial. Instead, most criminal charges result in plea bargains where the criminal defendant agrees to plead guilty in exchange for reduced charges or a sentencing recommendation from the prosecution. These plea deals save prosecutors the time and energy to try the case, and reduce the risk to the defendant of a harsh sentence.

In this respect, you are presumed innocent unless the prosecution proves that you are guilty. However, you are also entitled to present a defense. Your defense can take a few forms:

While not every person facing criminal charges will also face a lawsuit, it does happen and you should be prepared.

Facing criminal charges is stressful because a conviction could change your life. However, knowing what to expect can help you to take it on. Just keep in mind that hiring a good criminal defense lawyer can be one of the most important moves you can make.