What to Know About Current Civil Unrest Protests 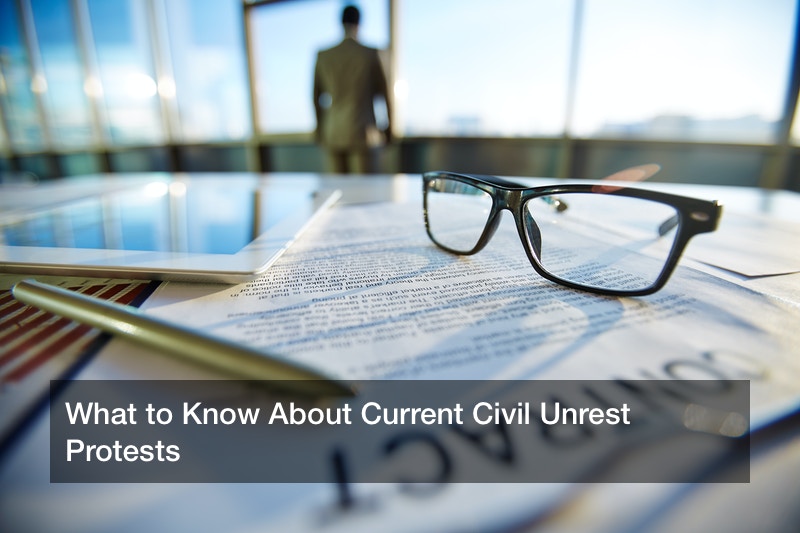 Although images of protests dominate the evening news, most Americans are caught in the middle just trying to keep up on information about current events. The various protests have different causes and triggering events, so it would be difficult to address all the issues, from the societal ills that have contributed to the unrest to the police equipment used to break up the protests.

However, there are some facts and principles that underlie all the protests, regardless of the cause or effects of any individual protest. Here is some information about current events, specifically protests in America:

Although the U.S. Constitution went into effect in 1789, it was primarily directed to the powers of the new federal government. The powers reserved for the people and the related limitations on the government did not come into being until the Bill of Rights was ratified in 1791.

This means that neither the U.S. government nor the state governments can prevent a peaceful protest by, for example, blocking roads or threatening to arrest protestors who show up at the protest. This restriction is intended to protect the right of Americans to express themselves if this includes assembling for a “protest.”

In short, the American founders felt that when balancing the government’s need for order against the inconvenience and negative optics of protests, American principles favor the rights of the protestors over the authority of the government. For protesters looking for legal information about current events, the knowledge that peaceful protests are constitutionally protected is essential.

Most importantly, governments cannot use violence against peaceful protests or arrest protesters for exercising their civil rights to peacefully protest. This means that police who arrest peaceful protestors for shouting insults or holding disrespectful or even profane signs have likely violated the protestors’ rights and could expose their city, county, or state to liability.

Definition of a Riot

To understand news and information about current events, you must know that a peaceful protest is not the same as a riot. Although different states use different wording for their criminal statutes that prohibit rioting, the legal concept is the same. A riot happens when a group of people take concerted action with an express purpose to use violence, disorder, or terror (or the threat of violence, disorder, or terror) to disturb the peace.

As you can see, this definition has a number of caveats that make prosecutions for rioting fairly rare. Specifically:

Another fact to note is that rioting does not require actual violence, but just the threat of violence. This means that a group of people brandishing firearms could be a riot. This also means that protesters blocking a road silently is not a riot.

Although riot is used colloquially to describe rowdy protests, rowdiness might not be enough to meet the technical definition of a riot. This means that some of the information about current events might not be legally accurate if it uses the word riot, without intending to use the legal meaning of the word.

Looting is Not the Same As Rioting

Not all states have laws against looting. Instead, laws against theft and burglary are usually sufficient to cover acts of looting.

When a state has a law against looting, it usually covers the theft of property during a declared emergency. So, for looting laws to apply, the mayor or governor must declare a state of emergency. Without this declaration, most states’ looting laws would not be in effect. Keep in mind as you read information about current events, these laws would apply whether the emergency is caused by protests, hurricanes, wildfires, or any other type of disaster.

The difference between these various forms of property crimes is important because the prosecution must prove all the elements to a jury for a conviction. Eyewitnesses, video from security cameras, and police reports can be used to establish what the prosecution thinks a protestor did.

Rioting is not the same as property damage. Rather, prosecutors can use a variety of property crimes to punish people who damage property during a protest (peaceful or not). Some of these crimes include:

While policing protests, officers in riot gear are still subject to all the restrictions that a police officer normally must observe. For example, the standards that must be met for making an arrest or using force do not change just because there are large numbers of protesters.

Moreover, police should be extra careful when policing protests because reporters and legal advocates are often embedded with the protesters to make sure that the laws and norms are observed. A police officer who is caught on camera acting in a way that violates the law or departmental policies could be disciplined, fired, or prosecuted. In fact, cameras are highly effective in reducing misconduct. According to a recent study, officers who wear body cameras are the subjects of 93% fewer public complaints. This is valuable information about current events that can be used to reduce both police complaints and protests that result.

One risk that police officers do not need to worry about, however, is being sued. One issue that has fueled some protests is that police officers cannot be sued personally under a doctrine called “qualified immunity.” As long as a law enforcement officer is acting within the scope of the officer’s duties, any lawsuit for personal injury can only be filed against the officer’s employer and cannot be filed against the officer.

This has created some concern that police officers may feel less constrained because any action they commit while wearing their uniform is immune from personal injury law. Thus, a police officer who visibly uses unnecessary force does not need to pay for the injuries caused. Rather, the department, the city, and the state are responsible for any lawsuit damages. This lack of financial responsibility for injuries they cause might allow some police officers to feel unrestrained when it comes to causing injuries.

The press has a right to cover protests that also stems from the First Amendment to the U.S. Constitution. Under the First Amendment, laws that abridge freedom of the press are prohibited. This means that reporters cannot be arrested while covering protests or civil unrest. This also means that reporters cannot be blocked from covering protests or civil unrest.

As with protesters, reasonable limitations on time and place can be imposed on reporters. For example, law enforcement can move reporters away from areas where active police operations are occurring for the safety of the reporters and the officers. However, using police operations as a pretext to prevent reporters from seeing or recording police behavior probably violates both the press’s right to cover newsworthy events and the public’s right to information about current events. Without press reporting information about current events, the government cannot be held accountable.

Often the information about current events neglects to cover the aftermath of protests. Once the protest is over and the flashy images of night time protests have passed, the news moves onto other events. However, for people involved in protests, the story could continue.

For protesters who have been arrested, the local prosecutor must decide whether to file charges or release them. If they are held on criminal charges, they will be held until a bail hearing. If bail is set, they must contact a bail bondsman to post bail and secure their release.

For many peaceful protesters who were arrested as a result of police overreach, bail funds have been established. These bail funds are charities that post cash bail in cases where the arrests or charges are legally defective because they either fail to state a crime or violate a protester’s rights.

After making bail, a defendant must still make appearances in court to address the criminal charges. The defendant will most likely need to hire a criminal defense lawyer to assist the defendant to prepare a defense. The defenses available to a criminal defendant will vary depending on the crimes charged. However, if the protester was arrested merely for being involved in a peaceful protest, the charges will likely be dropped and the city might be at risk of being sued for violating the protester’s civil rights.

In addition to the protesters, business owners also have to deal with the effects of civil unrest. Regardless of whether someone is arrested for damaging a business’s property, the business must still repair or rebuild the damaged property. Fortunately, most insurance policies cover damage caused by civil disorders. For businesses, the process for rebuilding or repairing might include:

Peaceful protests go back to the founding of the country. Setting aside the exact issue being protested, most Americans would agree that the right to protest is essential for calling attention to societal wrongs and government abuses. This allows Americans to gather information about current events being protested and decide for themselves how to deal with the issues and improve the country.